skip to main | skip to sidebar

I didn't get it.  Was it an illusion, a mirage, a byproduct of heat stroke?   Right there, as clear as day for all the world to see both at 70 miles per hour along interstate 40 and at a more leisurely pace on Route 66, about 24.5 miles east of Amarillo, Texas is this fantastic leap of faith/imagination in the form of a peace park apparently conceived and built by one Richard Daniel Baker, born June 19, 1951 where we stopped and spent an hour amazed at the spectacle which we were a part of as we roamed alone through this monument of peace, strength, whimsy and faith, in spite of overwhelming evidence to the contrary.

Returning home, I eagerly googled this phenomena in every search permutation possible to find out something about what we experienced and came up with nothing.  Got Jackie, the master of the search on the case, and she too was stymied.  Not a reference, image, or entry to be found of this obviously spectacular and prominent landmark that had to have been passed by thousands of pilgrims making the 66 trek.  Finally, confirmation that it was not a dream.  There, on a web page documenting the Wehner family vacation of 2013, was a snapshot of the kids posing in and around the central peace sign.  Validation at last, but was that it for such an imposing presence along such a fabled and well visited road.  And as for Richard Daniel Baker, creator of all this, not a word. 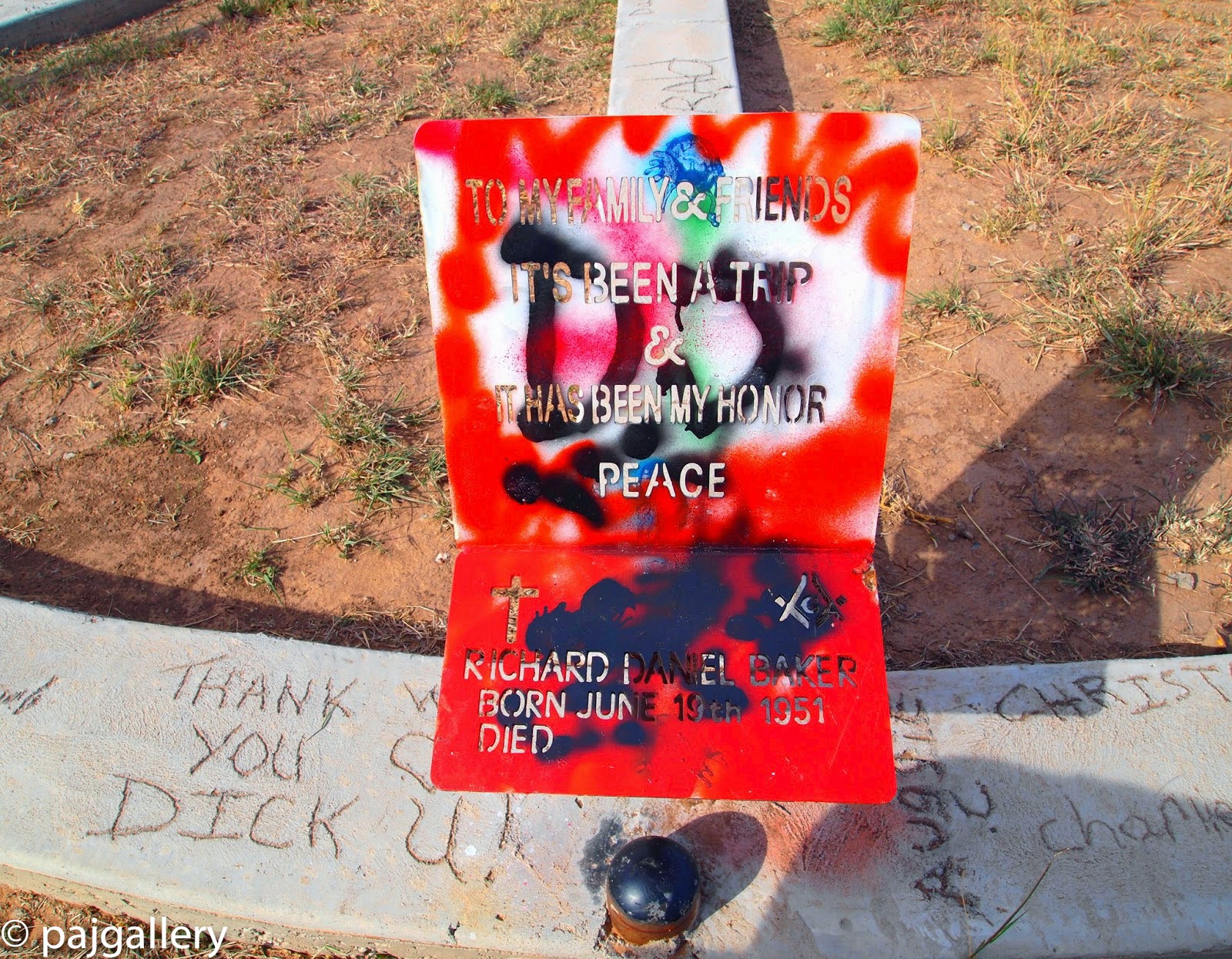 In the spirit of the experience, I sat in this chair overlooking his creation, closed my eyes, hoped and dreamed that I might be beamed up, but alas, no luck, I opened my eyes and there I sat with nothing more than the good fortune to share Richard's dream. 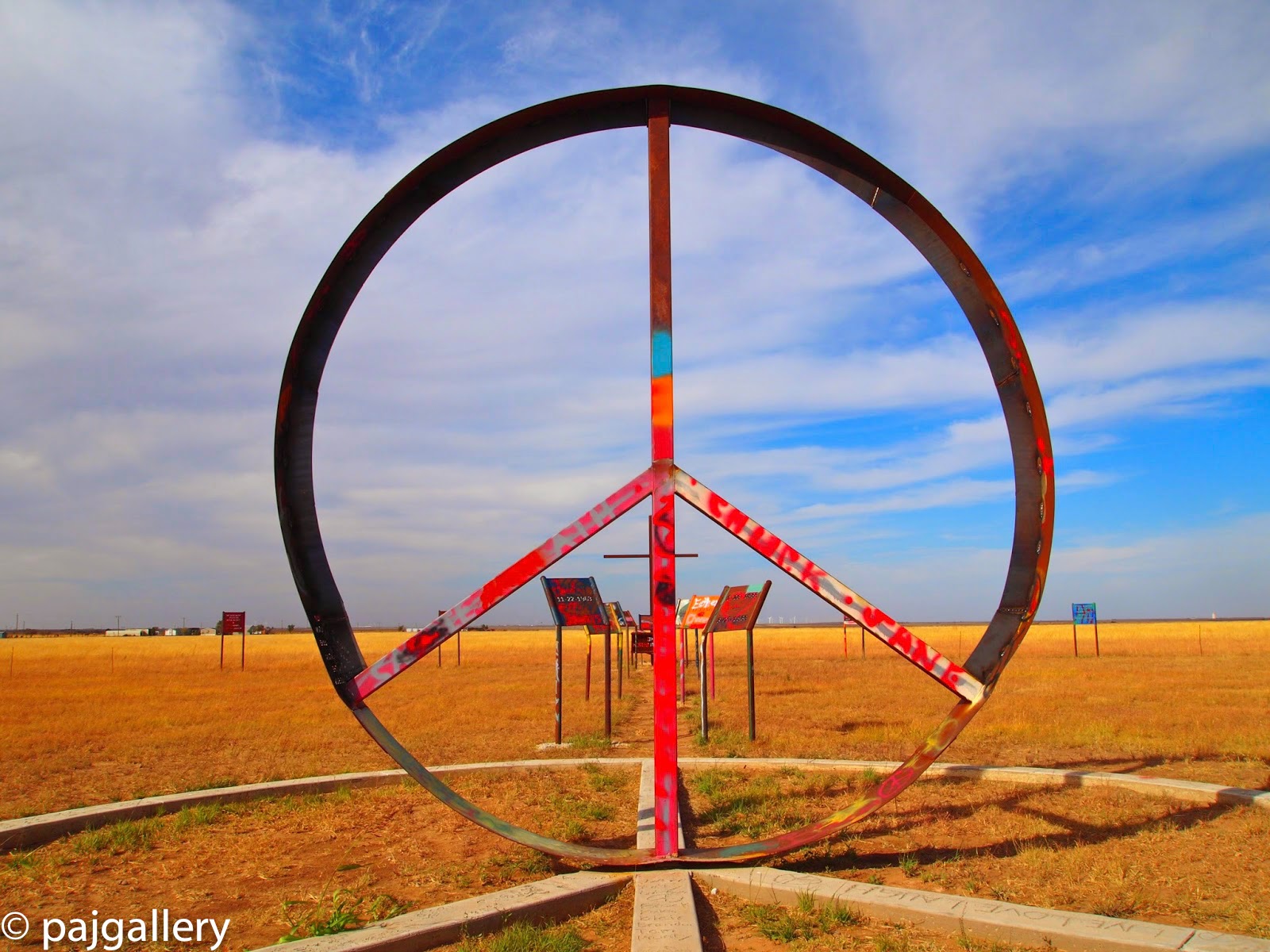 As I have said before when trying to somehow communicate the experience of being in a certain place at a certain time in a certain state of mind, it is no more possible to do justice to this experience than it is to bring the Sistene Chapel home on a post card.  So too, this paean to peace.  So the following are the view from the peace chair and the results of my struggle to come to terms with this unexpected experience. 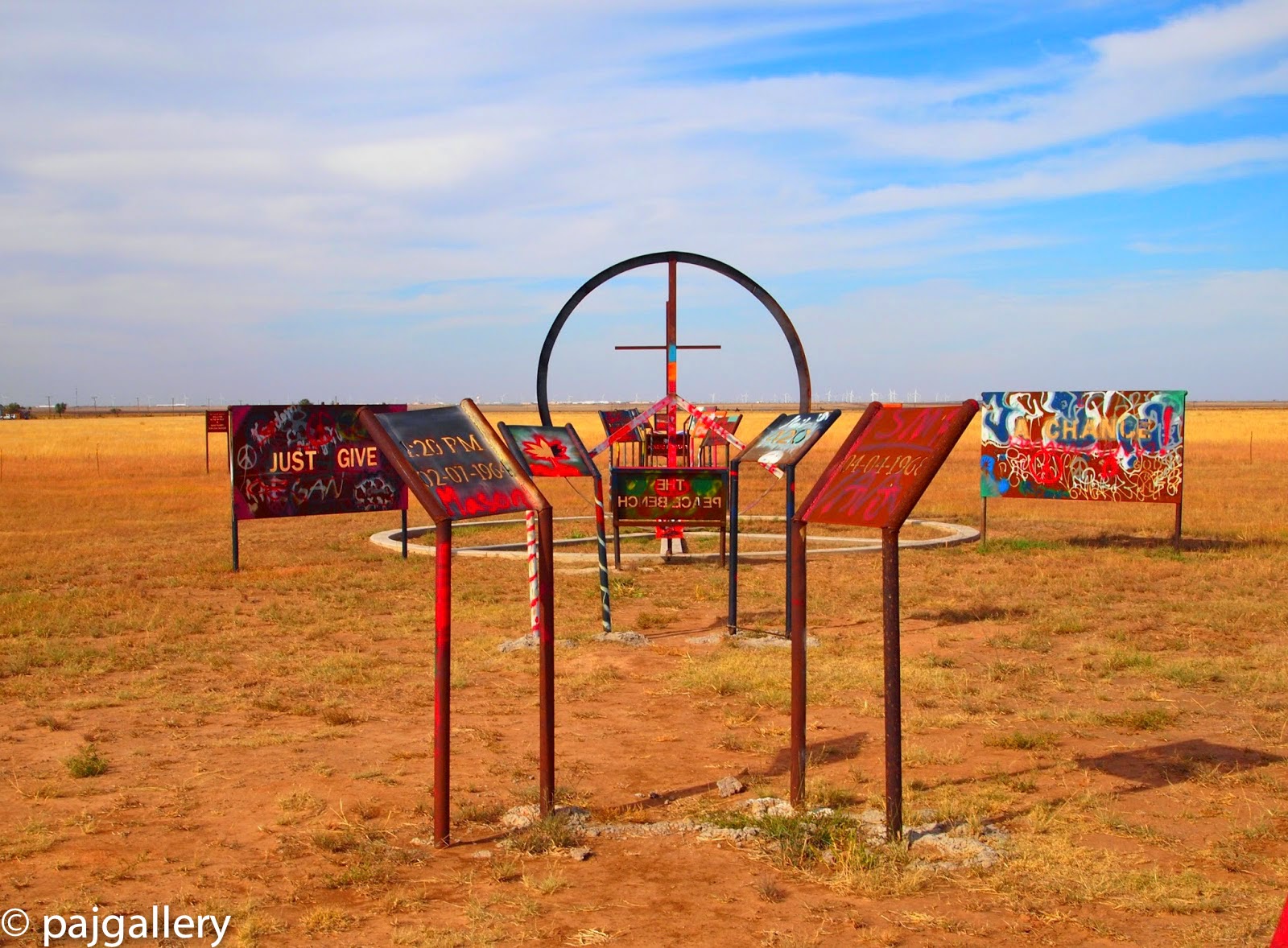 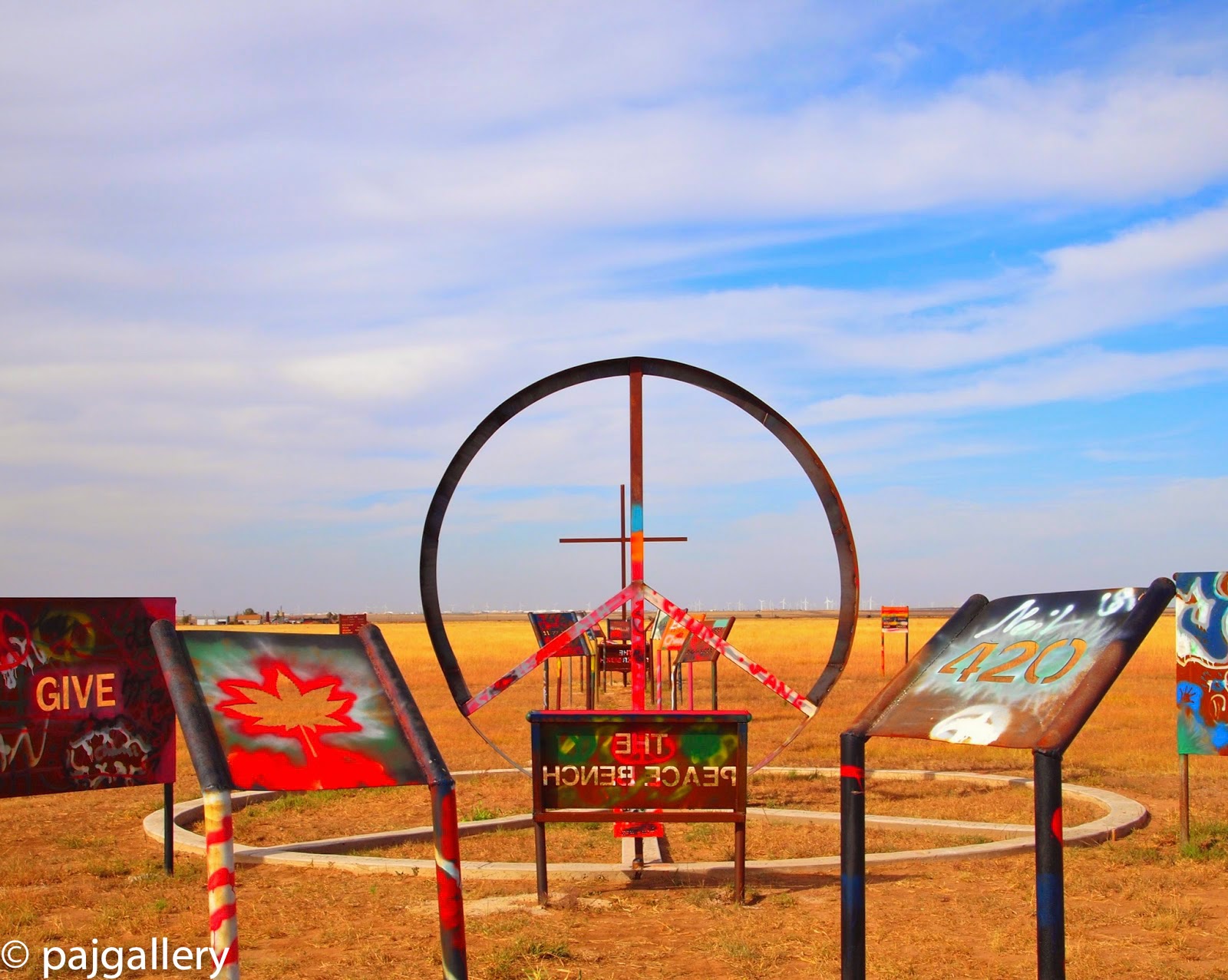 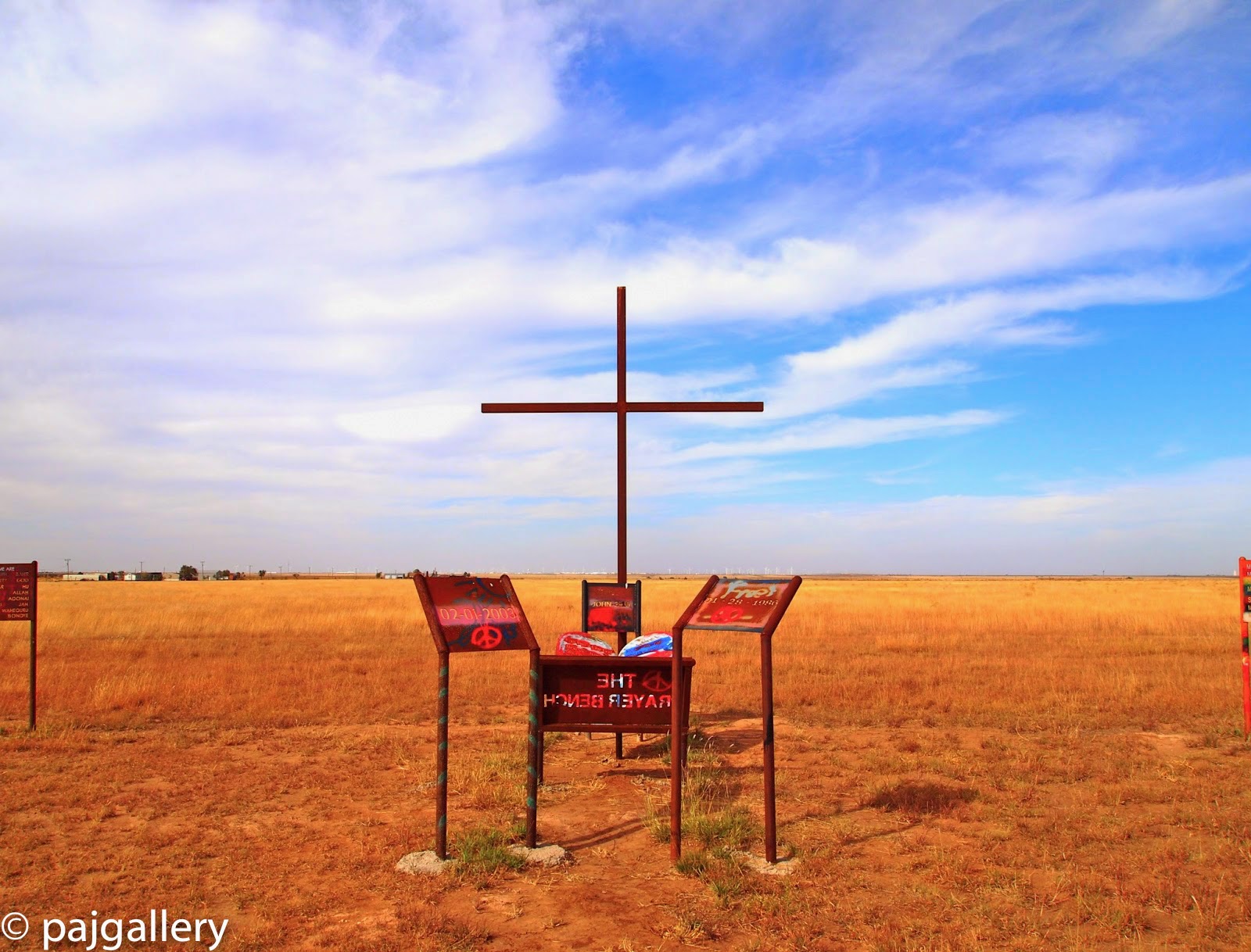 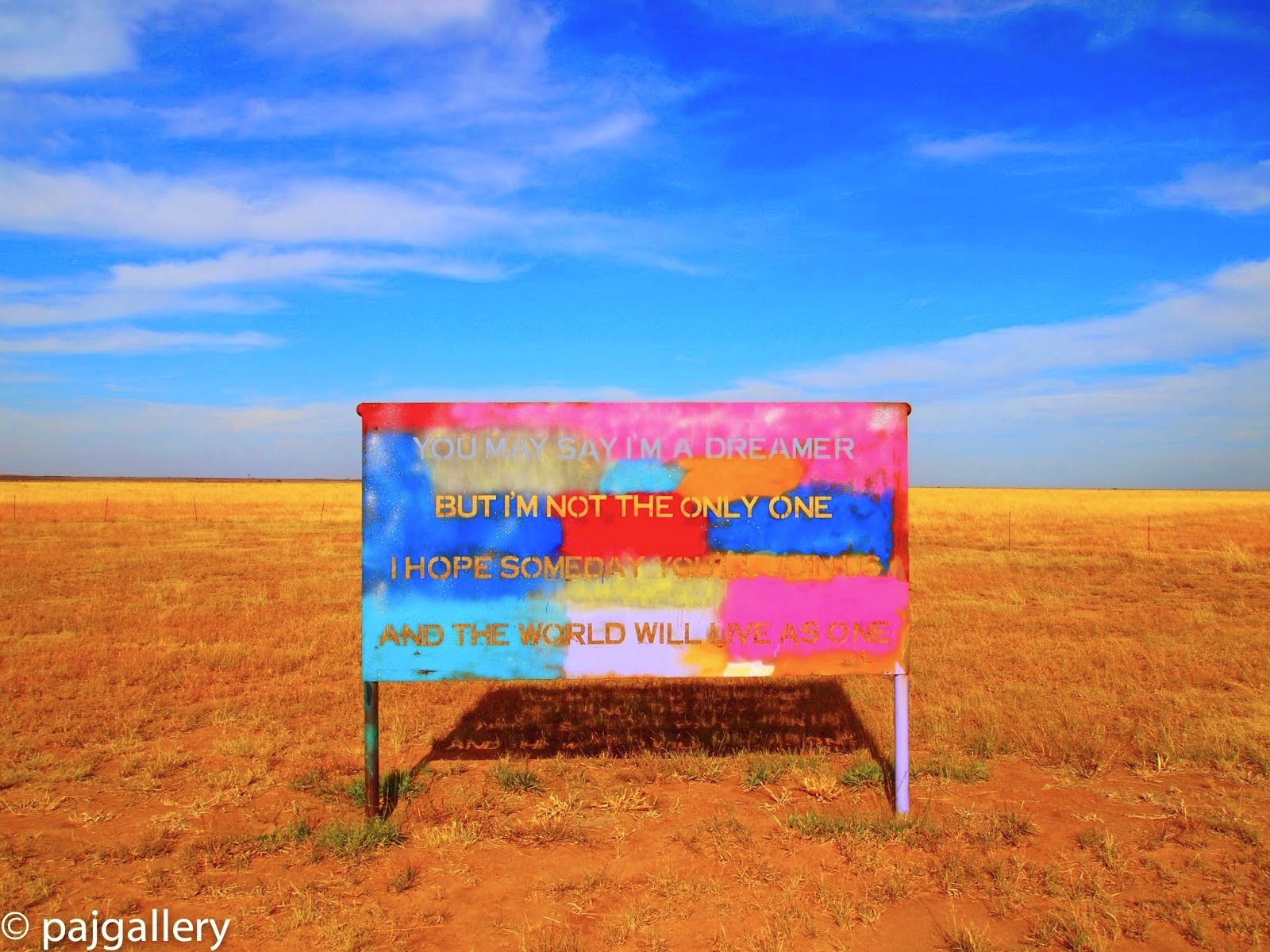 Although it remains hidden in plain sight, they say that sometimes, in order to find something, you need to know what to look for and to be open to the experience.   I am thankful for the clouds in the sky that afternoon and thankful to you,  Richard Daniel Baker, born June 19, 1951 for what you've created.

12/20/14
Addendum, mystery solved...
Received an e-mail this week regarding this posting from Barbara Chittenden who knows Richard Baker well and was actually involved in the creation of the peace monument.  I want to share this with everyone who has expressed interest in the Peace Farm.  Thanks Barbara!!!

Pablo
Pablo Shapiro, guerilla poet, high plains drifter with camera, urban archeologist, dreamer, epistemologist, seeker of symmetry in an imperfect world, documentarian of things arcane, self proclaimed honorary Cornhusker. I travel with a pen and a fork in my pocket because I never know when my next deep thought or next hot meal will come my way. Who am I? Possibly the world's second most interesting man. Check the blog, particularly the posting C'est Moi, for a more complete profile.